So I was driving down the road yesterday and I received a text from my cousin saying, “you’re on the x now”.  By the time I got to it tuned in it was already over…So I pulled over in a parking lot in Lafayette trying to see if I could hear them mention the string of artists that were just played, but I was in Lafayette and the station is out of Indy, so it barely came in and I didn’t hear it.  I went to the website to look for the playlist and found it!  There was my name next to Pearl Jam, Foo Fights and Bush…Wow!  Last Friday I received a comment on my youtube channel from someone saying they heard my song on X103 that night, and liked what they heard and looked me up!  I thought then, wow it’s Friday, did they play my song on a Friday?  I had submitted my song for their show Indy X Files that airs on Sunday nights at 7 ( I believe)…but they have been playing my song “Right Back Where I’ve Been” (co wrote by Jim Miller) on the regular rotation.  I’m pretty excited about it and I hope they get a good response from spinning it! 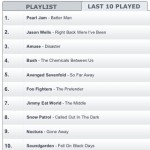